Insights from our team: Stranger Things and other fictional models can inspire effective team building 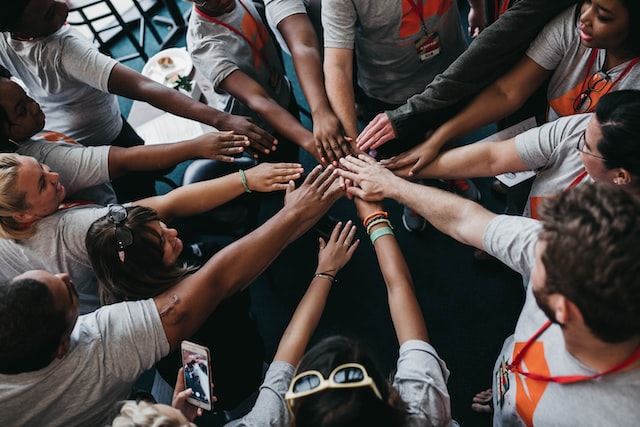 Since its inception in 2016, fans of all ages have reveled in Stranger Things’ nail-biting plotlines and dizzying emotional depth. Over the years, the multi-season, 1980s-set TV show has earned outstanding ratings and innumerable accolades, positioning it as a modern classic.

But every Netflix hit has its skeptics — who, in the case of Stranger Things, may dismiss the show as pedestrian and childlike. Why spend dozens of hours watching a troupe of middle- and high-school-aged kids (and eventually, their parents) obliterate evil monsters in an attempt to save the world?

The show follows fifteen interconnected main characters who, in spite of their obvious differences, ultimately rescue humanity from the evil grip of an immortal demon.

“Right here,” one of the younger characters says in season one, after being abducted and taken to an alternate universe. But not with spoken words — through a flickering-lights contraption his mother built, allowing the two to communicate. Masterful communication tactics are a frequent trope across the series, and despite each of the characters’ discrete agendas, the most memorable scenes are ones in which their strengths coalesce.

Arguably, when reframed, Stranger Things is a story about the world’s most perfect team. A fifteen-person team that, despite geographic separation, drastic age differences, and widely varied skillsets, solves impossible issues through strategies that are equal parts integrative and multifarious.

Recruiters and team builders in the real world often want to form synergistic teams that are akin to this fictional model — composed of passionate, diverse problem-solvers, each offering their own unique talents and strengths, united around common goals. But many struggle to attract the right people.

As modern organizations become more team-oriented and collaborative, diversity — in background, experience, and expertise — can give any firm a competitive edge. It’s estimated that companies that prioritize inclusion and diversity are 60% more likely to outperform their peers.

Additionally, 84% of recruiters have reported that “culture fit” has become a key factor when hiring. With all these elements considered, how exactly can hiring professionals increase synergy across their teams?

Here are a few simple yet strategic steps you can take to fortify and diversify the composition of your team:

1.    Give external audiences a window into the dynamics of your existing team

Prospective hires may have more confidence and enthusiasm in your organization if they can observe the dynamics of your team with their own eyes. By publishing your team’s photos and biographies online, new recruits, clients, and virtually any external audience can see the humans behind the work you do. This puts transparency at the forefront — new team members can visualize, from the very beginning, exactly how they will fit in.

2.    Showcase your team’s strengths and accomplishments through different channels

In a simple sense, every team is composed of a set of characters, not too dissimilar from the Stranger Things model. The people who make up your team are accomplishing incredible things, both inside and outside of work — showcase this through your organization’s social media accounts, LinkedIn, or your website. That way, external audiences know immediately that your team is one that uplifts and celebrates the people within it.

It can be easy to forget that your colleagues themselves can offer valuable insights when consolidating or expanding your existing team. Gelling with prospective new team members can feel more seamless if you have an already-established common connection. But to maximize synergy, fairness, and diversity while building your team, implement this alongside a variety of hiring strategies to attract talent from multiple different arenas.

Fostering an inclusive company culture goes beyond a simple “equal opportunity employer” statement. Start by examining your own brand — does your narrative emphasize diversity and inclusion? Then turn to your talent pipeline and recruiting strategy. Consider offering alternative routes to employment and reevaluate the factors you typically screen for. Keep up the momentum by producing content that resonates with a variety of audiences.